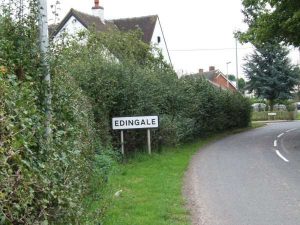 Approaching the village from Croxall on the Croxall Road the first thing you see on the left is Gables , a whitewashed cottage dating back some 200 years and of unusually high quality. It stands on the crossroads at the entrance to Pessall Lane with School Lane on your right. 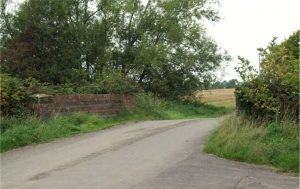 Pessall Lane is a no through road leading to a cluster of small holdings about a mile outside the village. Until recently these were let to tenant farmers though most have now been vacated and some of the buildings sold off as private dwellings or for commercial use.

The houses in Pessall Lane extend between the crossroad and the bridge over the Pessall Brook, a distance of approximately 100 metres and are all post 1930s. 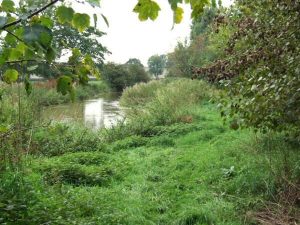 Back at the crossroads on the opposite side is School Lane, like most in the village a no through road, this leading to Pingle Meadow and the River Mease. 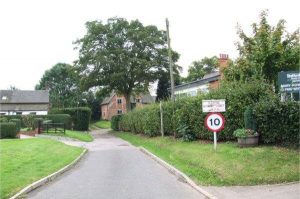 On your right is Mary Howard School originally built in 1915 with several more recent extensions.
The next building is School House, almost certainly the oldest building in the village. Its core, a large open hall and cross wing, is believed to date from the 1400s and clearly belonged to a yeoman of considerable means. The schoolroom was constructed in the 1820s.
Opposite on the left is Lilac Cottage built in the 1700s and was once one of the village shops but closed in the 1940s. 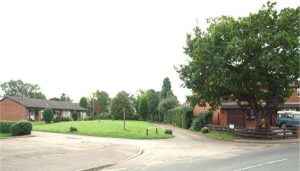 Back to the crossroad and continuing into the village there are some council houses on either side. Those on the right were built in the 1930s and the ones on the left in the 1960s to replace a terrace of old cottages.
On the right is Moores Croft, an ancient name of unknown origin. This leads to the Village Hall, playing field and play areas. The current Village Hall was opened in 1977 to replace the wooden building dating from the 1950s.Continuing along Croxall Road a few metres beyond Moores Croft stands an old oak tree behind which is Woodyard Drive. On this site once stood the Blacksmiths, a shoeing shed, a thatched wheelwrights shop, wood drying room and one of the village’s Water Pumps.

At the end of the drive is Forge Cottage and Joe’s Cave, a dwelling built on the site of a nuclear bunker constructed during the cold war.
Past The Woodyard on the right stands a house that was at one time the Village Shop and Post Office, long since closed as a result of economic pressures on rural businesses. 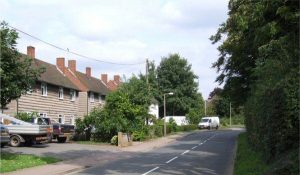 Back along Croxall Road, on your left you come to the ‘Airey’ houses built in the 1940s to replace another terrace of old cottages. On your right you pass The Firs, one of Edingale’s larger residences, though sadly empty for many years. It is a Georgian house that was once a farm holding much of the land around the village. It is an old site that used to have a medieval barn in its grounds. 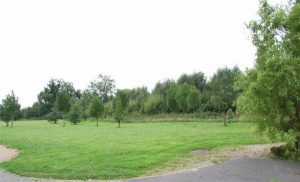 On the left is Blakeways Close leading to Rowley Close, both small new developments built in 1989 and 2001 respectively.
At the bottom of Rowley Close is an area of open ground bordered by the Pessall Brook on the far side and a footpath on the nearside which leads round to the Pessall Lane bridge.

Almost opposite Blakeways Close and on the right is Hatchett Lane. At the bottom of the lane is a small development of houses in Fields Farm Drive on the site of what was once Fields Farm. The original 300 year old farmhouse is still visible and fronts Croxall Road. At the top of the lane there is a footpath which leads through the Churchyard to the River Mease. 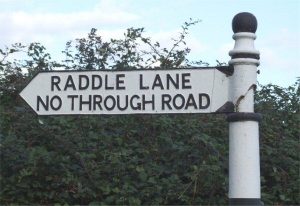 Croxall Road continues up a short rise with elevated properties on either side until you get to the top and Raddle Lane is on your left and just beyond on your right, Church Lane, more no through roads.
This marks the point at which Croxall Road becomes Main Road. 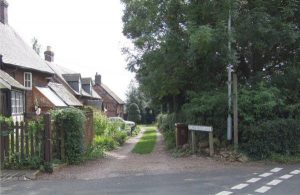 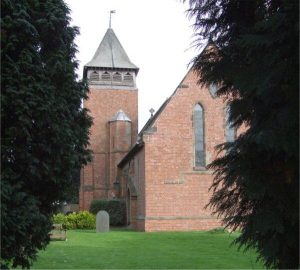 Below The Vicarage stands Holy Trinity Church, a Victorian building that replaced an earlier Georgian one. There have been at least four churches on this site dating from Saxon times and a Saxon window remains by the vestry.
Returning to Main Road at the junction with Church Lane there lies a mound known as the Tree Roots, so called because of the towering Elm trees that once stood there. They are depicted on Parish Council Chairman’s Chain of Office and reproduced at the foot of the website pages.
The mound is rumoured to be a Roman burial mound though if it is the site of a burial it is more likely to be of ancient British origin. 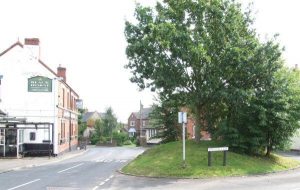 On opposite sides of Main Road and the Tree Roots is the Black Horse Pub (currently closed) and a small row of houses that once comprised the Post Office and the Bakery.
The Black Horse was one of two taverns in the village until the other was demolished in 1971. During its time it has also incorporated a Blacksmiths Shop and been the Village Shop. 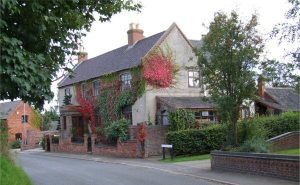 On the right further down Main Road is a small close, Holland Court, built on land once belonging to the imposing building next to it, Edingale House Farm. The age of the building is undetermined though the rear is Georgian.
This was farmed for many years by Edingale’s most famous resident, Jos Holland, who bred Shire Horses that achieved fame internationally. 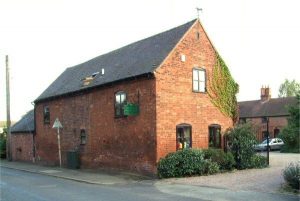 The Stableyard and farm buildings next door now form the Stableyard Nursery.
On the opposite side of the road in an elevated position sits Pear Tree Cottage, another old property dating from the 1700s. 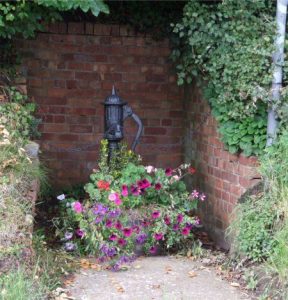 Continuing down Main Road on your right are three house built on the site of the Holly Bush, the other tavern in the village, and situated in the bank opposite is another of the village water pumps.
There is a junction with a mini roundabout at this point. Turn right and you leave the village along Harlaston Road in the direction of the nearby village of Harlaston that lies on the other side of the River Mease. 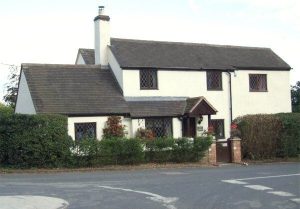 Adjacent to the roundabout is Rose Cottage, the core of which is over 300 years old. This was once the home of the Edingale ‘pinner’ whose job it was to round up stray animals and hold them in a pen next to the house until their owners could collect them. 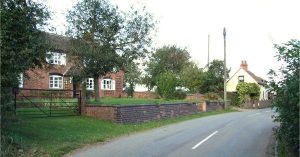 Continuing over the roundabout into Lullington Road is Vine House and Briar Oak both built prior to 1800 and opposite is Ivanhoe Cottage and Wright’s Cottage which was a shop until 1931.
Less than a mile down the road you pass into Derbyshire before arriving in the village of Lullington. 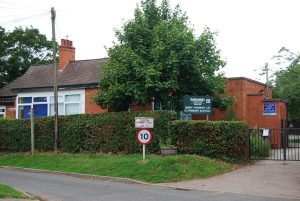 On the corner of Croxall Road and School Lane, we have the The Mary Howard Church of England [C] Primary School.